Tourist Trap is the sixth episode of the first season of Ben 10.

The Tennysons are in the Rust Bucket, and Ben is making faces through the window at the kid in the car across from them. The kid starts to eat a hamburger and sticks his tongue out without swallowing his food. This made Ben use the Omnitrix to turn into Stinkfly and make disturbing faces. This scared not only the boy, but his father as well causing him to drive fast away from the RV. After they left Stinkfly layed on the floor laughing while Gwen

tells him he takes his jokes to far. Then when Gwen is about to sit down, Stinkfly shoots his slime on her seat making her sit on it. Grandpa Max suddenly stops the RV making Stinkfly slide to the front. He then tells Ben that there is trouble ahead and makes sure he is ready to go.

There appears to be a trick knocked over sideways and a man is trapped inside, while a fire has started. Max tells Stinkfly that if the fire hits the propane tank the truck will explode. When Stinkfly went to the truck he is stopped by the fire and wishes he was Heatblast. He then finds out he can shoot his slime to put out the fire, so he does that until most of the fire is cleared off. Stinkfly jumped onto the truck and opened it up using his sharp tail. He picked up the man and carried him to safety, but then he saw the kid he was making faces at. The kid yelled saying that he was the monster who ate Ben, so Stinkfly quickly flew away.

Back in the Rust Bucket, the group is apparently headed to see something called "It", as they pass a bunch of signs advertising it. Ben asks Grandpa Max to tell them what "It" is, but he doesnt want to spoil anything because he has been planning this exciting trip all summer. When they arrive they have to close their eyes while getting off the RV. When they open them up they see a sign for Sparksville and they see an average boring town. Max appears to love this place and is very excited, but Ben, and Gwen seem to hate it. They are then greeted by the mayor of Sparksville. Grandpa Max then goes to get some tickets to enter the town. When they have their tickets Ben and Gwen are at the ticket booth but they see the mayor, because apparently the mayor does some of the jobs in the town. After the mayor tells them to mind the signs, they enter through the gate. Ben and Gwen take alot of pictures of them being by other attractions in the town until they find a sign leading to "It". ? When they go inside they see signs telling them not to use any electrical equiptment anywhere near "It". Finally when they get to "It" all they find is a giant rubber band ball, and the mayor shows up behind them telling them something is lies within "it". After he leaves Ben and Gwen get upset for being pranked, so Ben decides to turn into Four Arms to prank them back. Gwen actually agrees with him and hopes he has something special in mind.

While playing with the giant rubber band ball, Four Arms accidentally drops it making it bounce high through the wall and crashes through almost everything in the town. Once Four Arms is able to stop it, he gets slapped by Gwen for turning her into a criminal. Four Arms plans to just put everything back the way it was but the Omnitrix times out turning him back into Ben. After Ben touches the rubber band ball, the Omnitrix sends electricity into it allowing the Megawatt to escape. Before anyone notices what happened Ben and Gwen discuss what they will do. Ben tells Gwen that they should lie about it so when they find Grandpa Max they try to pretend like they dont know anything. The Megawhatt is then seen escaping the giant rubber band ball and shooting a hole through the Sparksville sign.?

In the morning Grandpa Max calls Ben and Gwen outside in an angry voice. When they get outside they see the

town damageed even worse then they remembered. Ben plays it off asking what happened, but when the mayor appears telling them its obvious who is responible for what happened, Ben, Gwen, and Max all think he is talking about Ben and Gwen. However, to everyones surprise, the mayor reveals that the Megawhatt is responsible for it, as it appears in front of them. The mayor wonders what the Megawhatt is but when Gwen says it could be an alien, the mayor doesnt seem to believe her. When the Megawhatt attacks a soda machine, the mayor explains that the more electricity it eats, the more powerful it gets. He also says the Megawatt has a very dangerous sence of humor, as the megawhatt fires soda cans at them. They all hide behind a tipped over car as Ben admits they he is the one who released him. When Max asks the mayor how to stop it, the mayor sits back and says that they are the ones who have to figure it out since they let it out. The Megawatt then stops and goes to hide somewhere. Grandpa Max, Gwen, and Ben go out to try to figure out how to catch it, and find it until the Megawatt came out of a cable and attacked Max giving him a wedgie. To save Grandpa Max, Ben uses the Omnitrix to turn intoUpgrade but he reveals that he isnt what he was trying to turn into. The Megawatt then drops Grandpa Max and causes more mayham. Upgrade appears rolling on the rubber band ball as it shoots rubber bands out accidentally almost hitting Gwen and Max. The Megawatt starts laughing at Upgrade making him angry which lead to him shooting a big green lazer out of his eye almost hitting the Megawatt. Surprised at his new found power, Upgrade chases after

the Megawatt but it is to fast for him. When Upgrade finally grabbed Megawatt he was electricuted and knocked back. When Grandpa Max asks how they are going to ground the Megawatt, Gwen gets an idea and runs off. Upgrade gets mad again and picks up a sewer plate throwing it straight at the Megawatt splitting it in half. The two half of the Megawatt then regenerate into two seperate Megawatts revealing its power of duplication. After Upgrade times out, the Megawatts start to attack Ben until Grandpa Max and Gwen come to save him with a truck with a giant thermometer on it.

Max and Gwen were trying to lure the Megawatts closer to them so they could drop the thermometer using it as a lightning rod to catch the Megawatts. However the mayor reveals that the ground is just one big conductor indicating that the Megawatts are moving around underground until they find there way back to the surface, which they do when they find a telephone pole. However, it appears the Megawatts have multiplied even more making several Megawatts running around the town. Ben has been trying to use the Omnitrix to turn into another alien but the Omnitrix is still recharging. For a minute all the Megawatts run away really fast, and when everybody wonders where they are it appears they are all controlling a giant walking planetarium. As the planetarium walks away to break the dam, Gwen and Ben get an idea and come up with a plan.

While the planetarium is attacking the dam it is hit with a big wave of fire, making it back away from the dam. When the planetarium looks up, it sees Heatblast and then breaks the dam with one more attack making Heatblast lose balance and run down the dam. As he is running down, Heatblast creates a fire to fly down on.

Once he is on the ground, he seals up the dam. Then he flies towards the planetarium and crashes into a wall next to it. Right away the planetarium punches Heatblast knocking him out, but then Gwen appears next to them and sprays the planetarium with a hose. The planetarium attacks Gwen and tries to chase after her but Heatblast appears behind it and throws a giant fireball at it causing it to break and releasing all of the Megawatts from it. Heatblast then makes funny of them to lure them to him, as he hides under a blanket which is covering a giant fish bowl. The Megawatts then run into it and get stuck in the fish bowl because Heatblast uses his fire to seal the top of it.

Back in the town, construction workers appear to be rebuilding the town from its destruction. The mayor reveals to the gang that the Megawatts will be used for his new attraction as the worlds largest light bulb. As the group starts to leave Grandpa Max explains that there is a time and a place for a prank, but when Ben opens the door a bucket full of water falls on Bens head showing that Grandpa Max does enjoy pranks when he isnt the one getting pranked. 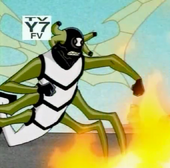 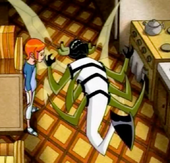 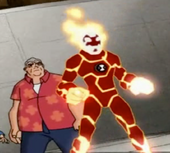 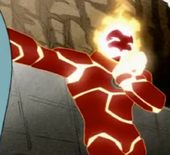