If you were looking for the creature, go to Krakken.

The Krakken is the third episode of Ben 10.

Ben is swimming in a lake, but Gwen refuses to go in, so Ben splashes her. He is pulled under, and Gwen thinks that it is a joke. Suddenly, a lake monster comes up and roars. Gwen is scared, but it is actually Four Arms. Gwen leaves, but Four Arms sees an actual monster.

The monster pulls Four Arms under, but he escapes and goes to the Rustbucket. He tells Gwen and Max that he was attacked by a monster, but neither of them believes him. Four Arms turns back into Ben, defeated. The next day, he continues to try and convince the two that he saw a real monster as they head for a fishing trip. Gwen decides not to go after Ben scares her with the bait. Max and Ben meet their captain, Captain Shaw, and they head off. Ben looks for the monster while on the boat, but mistakes some wood for it. Max tells Ben not to turn the fishing trip into a monster hunt, but Captain Shaw tells Ben about the Krakken that lives in the lake and vows to capture it. Max tells Ben that Captain Shaw is likely crazy, and not to believe him about the Krakken, but Ben doesn't think so. They arrive at their spot, but it is closed by an organization called Friends of Fish for a study. Max tells Captain Shaw to leave, to his and Ben's disappointment. Jonah Melville, the leader of Friends of Fish, tells Ben that the Krakken is a myth. Heading back, the sonar picks up the Krakken headed for the docks where Gwen is.

The Krakken emerges at the docks. Gwen first believes it to be Ben, but quickly realizes that it isn't. Captain Shaw gloats that he was right, and Ben decides to fight the Krakken with Ripjaws. However, he gets XLR8. XLR8 runs across the water and rescues people attacked by the Krakken, including Gwen. The Krakken then chases after the Friends of Fish boat, with XLR8 in pursuit. XLR8 creates a waterspout between the boat and the Krakken, trying to drive it away, but it is unsuccessful. The Krakken starts to take a crate off of the boat, but XLR8 kicks it until it goes away. XLR8 asks what was in the crate, and Melville says that it was their lunch. XLR8 yells at them for risking their lives for sandwiches, and then runs off. He's almost at the boat before turning back into Ben. Max notices Ben and tells Shaw to get him. Shaw curses at the Krakken and rescues Ben. Ben gloats that he and Captain Shaw were right to Max around a fire, but Max still thinks that Shaw is crazy and tells Ben to stay away from him and to leave the Krakken to Friends of Fish. Shaw curses at Friends of Fish because they closed the lake and storms off. Later that night, Gwen and Max are trying to get Ben out of the bathroom, but he isn't there. Ben has stowed away on Shaw's ship. The two of them look for the Krakken, using Shaw as live bait to lure it out. Shaw finds a sphere in a wrecked ship, and thinks that he sees the Krakken coming at him. He shoots with a spear gun, but misses. However, it is only Ben. Shaw surfaces to find a boat and three people, completely covered in wet suits, on his boat. They ask him what he saw underwater, but he doesn't tell. The leader, Jonah Melville, punches him and brings him onto their boat. While leaving, he mentions a cannery and eggs, and plants a bomb on his boat. After dodging the flaming wreckage, Ben turns into Stinkfly. Stinkfly chases after Melville's boat and clogs its laser guns with slime. The boat throws bombs at him, but he dodges them. One knocks down a tree, which sends him into the water. With we wings, Stinkfly cannot fly. The boat shoots at Stinkfly, but he jumps into a tree and hides. Melville throws Shaw overboard, but Stinkfly is dry enough to fly and saves him. The two barely make it to land before Ben turns into Stinkfly, and the two land on the Rustbucket's canopy.

In the Rustbucket, Ben tells Gwen and Max about the Krakken's eggs and Gwen discovers that Jonah Melville is actually a poacher. Ben realizes that the crate the Krakken wanted had eggs in it. Shaw and the gang take Shaw's spare boat and Gwen calls the police. Ben, Gwen, and Max leave Shaw behind at the docks, but he takes a nearby rowboat. On the Friends of Fish platform, Jonah Melville is loading a case with Krakken eggs. The Tennysons sail up underneath the platform and Ben turns into [[1]], a fish alien with enormous teeth, while Gwen and Max climb onto the platform. The Krakken bursts onto the platform and Friends of Fish members shoot at it while Jonah Melville boards an enormous sub. Ripjaws tears apart Melville's sub while saving the eggs. Several members attack Gwen and Max, but are easily defeated. Ripjaws and the Krakken manage to take the eggs off of the boat, but Melville chases in his sub. Ripjaws, Melville, and the Krakken tussle over the eggs for quite some time. Ripjaws gets them and gives them to the Krakken. Melville tries to take them again, but the Krakken destroys his sub and tries to eat him. Ripjaws saves him, punches him, and turns him into the authorities. Shaw brags that he has finally caught a Krakken, but it is actually Ripjaws. Max tells him to look again and it is Ben in the net. Shaw is puzzled, and the Krakken is content with its eggs back.

Ben transforms into Ripjaws for the first time. 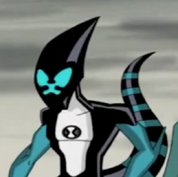 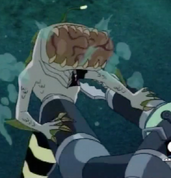 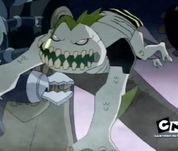 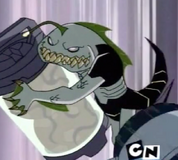 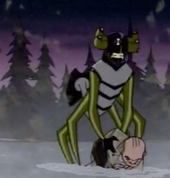 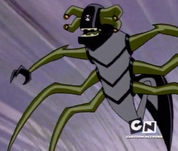