The Alliance is the eight episode of the first season of Ben 10.

On Vilgax's ship, two of his drones are seen flying out of the ship heading to earth. One ofVilgax's Drones talks to Vilgax about the other robots being able to find and retrieve the Omnitrix. However, Vilgax states that they will only beable to find it since the person who is wearing the Omnitrix is very powerful and inteligent.?

Ben and Gwen are inside a gas station where they are buying something to eat. When they get outside they see Grandpa Max washing the windows of the Rust Bucket. All of the sudden the vehicle next to them gets shot by some kind of lazer and it catches on fire. When they look to see where the blast came from, three people in a

gang uniform with masks are seen holding wapons. Before they can shoot Ben and Gwen, Max pushes them to the RV and dodges a lazer by jumping to the other side. Ben realizes that he needs to save Grandpa Max, so he turns into Four Arms.Four Arms jumps out and attacks the three crooks saving Gwen, and Grandpa Max. When Four Arms looks to see if the man in the truck was ok, the man just runs away leaving Four Arms to get blasted by another gun.? Four Arms went to attack the three crrooks again but when he grabbed two of them to take off their helmets, he saw that they were all girls. Apparently Four Arms doesnt want to hurt any girls so he tries to back down, but then he gets blasted again by a girl named Rojo from behind him. Just as she was about to finish Four Arms off, the two drones from Vilgax's ship, came down shooting lazers at all of them blasting Rojo's car which caused her money to go everywhere. The other two members of the girl gang ran away leaving Rojo to fight Four Arms by herself. While Four Arms is distracted with the two robots, Rojo comes up from behind him again except this time Grandpa Max throws a tire at her making her fall to the ground. When Rojo gets up to fire her gun at Max, she misses hitting the gas station causing parts of the ceiling to fall on Grandpa Max knocking him out. Four Arms was scared for him and furious at Rojo so he grabbed the two drones and smashed them together throwing them straight at Rojo knocking her out. Four Arms then grabbed Gwen and Max jumping them to a hospital. When Rojo finally woke up one of Vilgax's Drones attached a wire to her and started merging with her. When the police showed up she appeared to have the technology from the drone and was able to fire lazers out of her shoulders.

Once they got to the hospital, the doctor tells Ben and Gwen that Max will be fine but when he asks them what happened, Ben tries to tell him about the robot drone making him think they are just imagining things to make them feel better. On Vilgax's ship, Vilgax finds out what happened and sees that his drone as merged with Rojo. While Rojo is robbing a store she hears Vilgax in her head and he tells her that she must do as he says. When she tries to denie him her brain hurts and she sees Vilgax in her imagination. After she decides to follow him and asks what he wants, he tells her to go after the Omnitrix.

Back at the Hospital Ben and Gwen are outside his room. Ben thinks of ways he can help Grandpa Max by turning into an alien but after Gwen tells him he cant, he activates the Omnitrix allowing Rojo to track his location. Back in the hospital as Gwen and Ben are sitting by the room, Rojo smashes in through the window asking for the Omnitrix. Rojo tries to fire lazers at them but they run fast down thehallways dodging her attacks. They find stairs and climb down to the first floor. They quickly run outside and hide behind a truck but when Rojo blasts herself out the doors, she shoots at the cluff nearby causing an avelcanche. Ben tries to stop it by going Four Arms, however he accidentally turns into Heablast. Heatblast tries to melt the rocks but instead makes it worse because now the rocks are falling while they are on fire. Heatblast then melts al the trucks stopping the rocks from hitting the

hospital, but the rocks then start to roll towards the canyon which people are at. When Heatblast runs over Rojo tries to attack him but Heatblast easily pushes her away.

Heatblast quickly shoots fire at the bridge so the rocks fall into the water, saving all of the construction workers. He is then attacked by Rojo again and is blasted several times. Heatblast appears to not be damaged at all and lures Rojo into a pile of leaked oil. Heatblast then sparks the oil with a flame causing Rojo to explode flying up into the sky. Back at the hospital Ben talks to Grandpa and Gwen about how they should not be around him anymore because its not safe thanks to him having the Omnitrix. Rojo is then seen to still be standing and sees Vilgax inside her head again. She tells Vilgax that she was unable to retrieve the Omnitrix but he tells her that if she fails again he will end her life.

Back at the hospital Ben puts a note on Grandpas bed and runs off. Then he is at a park where he hears a radio broadcast for where Rojo is attacking, At the hospital Gwen wakes up and reads the note that tells them Ben left?

so they wont ever have to get hurt again. Gwen tells Grandpa that she knows where he is and runs off before Grandpa Max could get up to come with. Rojo is seen destroying several buildings when XLR8 comes in to attack her. She mentions letting her boss have the Omnitrix andXLR8 asks who she is talking about. While they are fighting a big tank comes to blast them. XLR8 moves out of the way and lets Rojo get blasted, but she then picks up the tank throwing it at XLR8. When an ambulance shows up Gwen opens the back doors and when Rojo sees her she is about to blast Gwen with her guns. However, XLR8 runs past her grabbing Gwen and brining her to a safe place.?

After XLR8 times out, Rojo, the villain, chases Ben and Gwen into a workout facility. Gwen gets a phone call from Max and hands the phone to Ben. Grandpa Max tells Ben that he should try taking her down from the inside. Ben then gets the idea to turn into Upgrade, When Rojo attacks them Upgrade jumps on her back and merges with her and her alien tech. Upgrade is then seen to have entered Rojos brain and he sees Vilgax for the first time. Vilgax tells Upgrade that he will find him and kill him. Rojo then pulls Upgrade off her and attacks him. Upgrade quickly merges with different workout equiptment to knock Rojo down. He then tries to merge with her again but this time

seperating her from Vilgax's Drone. When Rojo loses her power she tries to beg for mercy but tricks Ben and picks up her blaster. Gwen quickly kicks her in the face knocking her out. Upgrade picks Rojo up and together he and Gwen walk outside handing Rojo over to the police.?

In the end Grandpa Max is alot better and he comes out of the hospital walking on crutches. When Gwen asks what happened back at the workout facility Ben explains that he saw an alien with a squid face on it. He mentioned that Vilgax told him to be afraid and when he looked at Grandpa Max he looked afraid to. Max told them that he was fine and they would be find to as long as they stay together. On Vilgax's ship Vilgax appears but all that is seen of him are his glowing red eyes ending the episode. 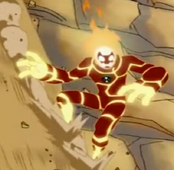 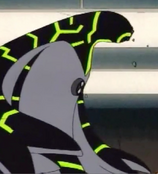 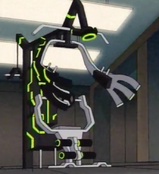