Permanent Retirement is the fourth episode of Ben 10, and the fourth of the first season.

Grandpa Max is at an ice cream shop. He is about to use an ATM when a big man comes up behind him and pushes him out of the way. When Max falls on the floor, a skinny guy shows up and smiles nastily at him. While this is happening, Ben and Gwen are inside the shop trying to order some ice cream. As soon as Ben looks out

the window and sees the thug that pushed down Max, he gets the Omnitrix ready. The man outside puts a crane attached to his truck onto the ATM and tells his partner to drive, so they can steal the cash inside. When his partner tries to drive, nothing happens, as Upgrade has taken over his truck. Upgrade then pushes the guy out of the truck and unmerges with it. The other man grabs the hook attached to the ATM and attacks Upgrade with it. However, Upgrade pulls on the chain, throwing the man to the ground. He is then stepped on by Max. Upgrade asks Grandpa Max what they will do next. To Ben's disapointment, Max tells him that they are going to visit their Aunt Vera for the weekend.

In the Rustbucket, Ben and Gwen are arguing about Aunt Vera. Ben says that it won't be fun, but Gwen states that she likes Aunt Vera. Aunt Vera is seen in her neighborhood talking to her neighbor Marty about seeing Max, Ben, and Gwen for the weekend. She asks Marty to come over later and say hello. After Marty accepts her invitation and goes into his house, a shadow of a strange creature appears and starts to attack Marty.

Back on the Rustbucket, the group is driving into Aunt Vera's neighborhood when Ben sees one of the neighbors on the roof doing a backflip to get onto the ground. Astonished, Ben asks Gwen if she saw the same thing, but she says that the sun must be affecting his brain. When they arrive at Vera's house, Ben wonders why old people have to live where it is so hot, and is then squirted by Gwen using a water gun. After that, Ben sees Marty in the window staring at Ben. He makes an angry face while jerking his neck in different directions, freaking Ben out. Aunt Vera comes outside and greets everyone with a hug, but as they walk inside, Marty appears to be watching them from the window with the same angry face. Once they get inside, they are eating a meal when Vera asks Ben what he has been up to. Ben states that he has been dealing with alien life forms, but Vera doesn't believe him. Gwen then

sees her collection of birds and asks her a question, leading up to a conversation. After Vera gives Ben coffee as candy, he gets upset and leaves to "use the bathroom". When he gets in the bathroom, he says that he needs to get out of her house and then turns into Ghostfreak. Downstairs, while Vera and Max are talking, Ghostfreak phases through the wall and reveals to Gwen that he is sneaking out, despite her protests. Ghostfreak then finds a golf kart and drives it around while invisible to have some fun. Once he smells food, he follows the scent to another house, but when he gets there, he sees one of the old ladies jumping onto her ceiling and eating a fly. Alarmed, Ghostfreak backs away, but then sees Marty riding his golf kart. Nearby sprinklers start to go off and freak Marty out, causing him to swerve around the water. Ghostfreak becomes curious and decides to follow Marty to a place with dumpsters. Marty then stretches his legs to walk over the high fence, freaking out Ghostfreak even more. Ghostfreak phases through the gate and watches Marty opening a trap door. The Omnitrix starts glowing red and then Ghostfreak turns back into Ben. Marty turns his head all the way around to stare at Ben, then the rest of his body turns around. Ben gets terrified and climbs over the fence to run away. He finds a nearby golf kart and drives it away at full speed. Before Ben can get away, Marty stretches his arms and grabs hold of the kart, pulling it back. Ben grabs a golf club out of the bag next to him and swings it, taking off Marty's right hand and allowing Ben

to drive away. However, Marty jumps on top of the kart and tries to attack Ben, but the kart swerves over a bump and flips over. Marty then grabs hold of Ben and pulls him closer, but before he could get Ben, the sprinklers turned on. Since he was afraid of the water, Marty let go of Ben and ran away. When Ben got back to the house, he explains everything he saw to Grandpa and Gwen, convincing them to go investigate Marty's house. When they enter and ask if anybody is home, no one answers, so they kee[ looking around. Grandpa Max saw that nothing seemed strange, so he decided to leave. Back at Vera's house, Grandpa Max said that he would take a walk in the morning, and that they can check it out some more tomorrow. That night, in Vera's bedroom, a slimy glob appears and wraps itself around Vera. In the morning, while Ben and Gwen are downstairs getting breakfast, Vera shows up and acts a bit strange. When Gwen accidentally drops her water, Aunt Vera jumps and does a split to hold herself against the walls, yelling at Gwen to clean it up. Gwen says that she is sorry and starts to clean it up, but then Vera asks where Max went. When told that he was going for a morning walk, she told them to behave while she went out somewhere. After she left Ben, explains to Gwen that Vera must be one of the creatures that is possessing the old people. Gwen and Ben decide to go find the trap door by the dumpster. Later, Vera asks Marty if the food supplies are ready for transport. As Ben and Gwen are walking towards the dumpster, two old people attack them. While running from them, Ben and Gwen run into Grandpa Max and try to explain what's going on. However, Max is posessed by one of the creatures as well and tries to attack Ben and Gwen. They try to run, but get trapped in between Grandpa

Max and three others carrying a car. After they throw the car at Ben and Gwen, Grandpa Max runs to grab them, but they escape, leaving Max to get crushed by the car. They get scared that Max is dead, but then they see him turn to slime and slide out from under the car before morphing back into Max. While Gwen looks for the trap door, Ben turns into Wildmutt to protect her. Wildmutt throws the dumpster at Grandpa Max and a few others, revealing the trap door. Before the old people can get them, Gwen gets on Wildmutt's back and he jumps down the trap door. Once they get to the bottom, they start running because they see the creatures climbing down the hole. They end up stopping because there are two different tunnels and they aren't sure which way to go. Wildmutt then senses Grandpa Max about to attack Gwen, so he bites Max's arms and throws him against the wall. Before Wildmutt can defeat Max, he starts to have second thoughts and think that it's the real Grandpa Max, but then gets attacked

and knocked down. Gwen tells him that he isn't the real Max and that he needs to defeat him, so Wildmutt pushes Max into the wall, causing rocks to fall on him. Wildmutt then takes Gwen and runs down the tunnel until they reach a dead end. Right before the Omnitrix times out, Wildmutt runs through the wall so that they are able to continue down the tunnel. As Ben and Gwen walk, they see a big alien spaceship along with several pods. It appears that all of the original citizens of the town have been captured and put into the pods. Ben keeps walking and finds Grandpa Max in his own pod, and he rips it open. Grandpa Max regains consiousness and asks Gwen what happened. Before Ben could open another pod, the fake Aunt Vera, Marty, and another person showed up, telling him not to do anything. Then the three creatures morphed from humans to greenish alien creatures called Limax. While Gwen is backing up, she accidentally hits something that opens the door to their ship, revealing more pods. Gwen sees Aunt Vera in one of the pods and tells Ben and Max. Ben pushes down on the Omnitrix to turn into Heatblast. When Heatblast tries to shoot fire at them, it only makes the Limax stronger and

allows them to morph into one large Limax. As Heatblast tries to fight it, it sees Grandpa Max and Gwen getting all the pods out of their ship, so the Limax shoots two different Limax off of its body to attack them. One of the Limax attacks Gwen, so Grandpa Max comes to help her. When the Limax see the water gun, they start to run away, and Gwen shoots them with it, causing them to dissolve. Gwen quickly tells Heatblast their weakness, and together they remember earlier they saw that the old people were afraid of water. Heatblast sees a water pipe on the ceiling and shoots a fireball at it, causing it to break, spraying water everywhere and defeating the Limax. Some of the surviving Limax escaped into the ship and blasted off, though Grandpa Max and Gwen got all of the pods out. They plan to put them all in bed so all the citizens thought they were dreaming. Ben says that he will use XLR8 to help put all the people back in their houses. While Ben, Gwen, and Grandpa Max are saying goodbye to Aunt Vera, she tells Ben to keep up the good work dealing with all the aliens he was telling her about earlier. When he asked if she was kidding she just laughed and said she was. In the end, back in the cave, a Limax comes out from under a bunch of rocks and just crawls away. 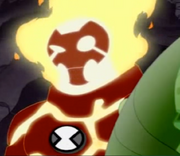 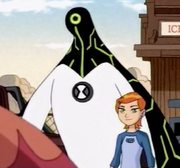 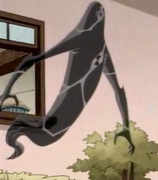 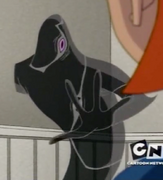 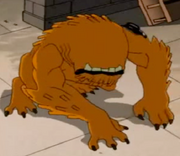