Kevin 11 is the seventh episode of the first season of Ben 10.

The Tennysons appear to be at a hotel to stay at for one night. As Grandpa Max is checking in at the front desk, Ben sees a sign for a new Sumo Slammers video game, so he runs up to the gates to try to get into to play it but the guard stops him asking for a pass. When the guard doesnt let him in making Ben go back to Max, he tells Ben not to sneak in that room. After Max and Gwen walk to their hotel room, Ben turns into Ghostfreak to sneak past

the guard while invisible. After Grandpa Max and Gwen are seen going into an elevator unable to find Ben, Ben is seen playing the sumo slammers video game. Since the Omnitrix must have timed out, the guard came up from behind Ben kicking him out.

Thanks to Ben, the group got kicked out of the hotel permanently. When they are in the Rust Bucket, Max is telling Ben he cant trust him because Ben is always misusing the watch. His words made Ben upset saying he uses it for good all the time, but Max just counters his argument saying Ben only uses it for himself. Max then grounds Ben making him not allowed to have or use any sumo slammer stuff for two weeks. Ben gets furious saying its his summer vacation and Max cant tell him what to do. After Ben says thtat Max isnt hid dad, Max pauses and decides to go back into the hotel to get some of his money back. After Max leaves, Ben chooses to leave the Rust Bucket and walk around, while Gwen tries to stop him following him into an arcade.

In the arcade, Ben is playing a baseball arcade game but loses. He then yells at a guy who works their saying the games are rip offs. A kid from behind Ben says that Ben is right and starts making fun of the worker as they laugh about it together. The boy then puts his hand on a machine making hundreds of game tokens come out. After the

kid says that Ben owes him one, Gwen comes up and tries to tell Ben that he can't take them since they arent his. Ben then tells the boy his name, as the kid introduces himself as Kevin. After Kevin sees two other guys he tells Ben that he has to go somewhere. Ben watches as Kevin tries to walk away but the guys start to grab hold of him threatening him. When Ben asks Kevin if he needs help, the thugs push him down. As Gwen is yelling Ben not to, he runs behind an arcade game and turns into XLR8. When XLR8 shows himself, the thugs just start to laugh making XLR8 mad, so he runs up to one of the guys and creates a tornado throwing him to the wall. He then quickly runs around taking out a guy one by one until the last thug is standing. After they are all taken out Ben and Gwen are outside as he must have timed out. Ben tells Gwen that she and Max would not understand. When Kevin comes out asking Ben if he saw that, Ben mentions that his name isXLR8 and that he is friends with him. After Ben tells Gwen to go back to the RV, Kevin explains to Ben about his powers as he is on his way to show Ben where he lives. When

Gwen gets to the Rust Bucket, Grandpa max furiously asks Gwen where Ben is.

In a tunnel with some train tracks, Ben and Kevin walk into a smaller room with furniture all against the walls. Happy with where Kevin lives, Ben asks why the gang in the arcade was after Kevin. Kevin says he trashed their hangout and asks Ben whats with his Grandpa. After Ben tells Kevin the story of how he snuck in to play the new Sumo Slammers video game, Kevin brings Ben to s hipping factory where the new releases of Sumo Slammers is. Once Kevin breaks in using his powers, Ben gets one of the video games.However, a bunch of police cars and helicopters show up and throw smoke grenades into the building. When Ben tries to go out the door, two cops come in. Kevin then absorbs power from one of the devices on the wall and then jumps on a kart giving it power. He then drives the kart straight into one of the police officers knocking him out. When they try to go outside again, they get cornered by police cars and a helicopter. They run back in, as Ben asks Kevin if he can keep a secret. Ben uses the Omnitrix to turn into Stinkfly, and after Kevin is surprised he mentions how bad Stinkfly smells. Stinkfly then grabs Kevin and flys out of the building taking out a few cops on the way out.

As they are flying away from helicopters, Stinkfly comes up with a plan to ditch them in the city. They fly around

the city and pass theRust Bucket, they then find a car holder vehicle. They follow the truck into a tunnel so the helicopters cant see them, and they fall into one of the cars as Stinkfly times out. Once Ben and Kevin find a safe spot, Ben explains that the Omnitrix allows him to turn into 10 different aliens. After Kevin asks to have the Omnitrix, Ben tells him it doesnt come off. Kevin then asks Ben if he wants to be partners, because with the two of them they could do whatever they wanted. After Ben takes a minute to think about it he agrees and follows Kevin wherever he goes.? Back in the RV, Max and Gwen are driving looking for Ben, and he is furious wanting to yell at Ben. In the tunnel with the train tracks, Kevin asks Ben to give him a boost to one of the lights. After Kevin absorbs the power from the light, he runs over to a lever switcing the trian tracks. He then reveals to Ben that a train full of cash will crash into a passenger train allowing them to become rich. When Ben finally understands how wrong it is, he tells Kevin that they cant do it and he will stop Kevin if he has to. After Kevin throws Ben down he tries to turn into Four Arms, but accidentally goes Heatblast. Kevin quickly absorbs the power from a nearby generator causing all the lights to go out making it hard for Heatblast to see. Kevin then jumps from behind onto Heatblast's back and as Heatblast tries to get him off, Kevin absorbs his aliens powers. Kevin gets blasted off Heatblast, but whe nHeatblast goes to check on him a big fireball gets thrown at him. When Heatblast looks up he sees Kevin with half the body of a

pyronite and half of his regular self.

Heatblast and Kevin has a little battle but before the trains come crashing into eachother, Heatblast is able to melt the control lever switching the tracks back. Then before Heatblast is hit by the oncoming train he creates a fire torando to boost himself on top of the train. As Heatblast is holding on for his life he melts the ceiling creating a hole for him to have a better grip on. In the Rust Bucket, Gwen and Max hear a news report of fires going off everywhere in the tunnels. They figure this must be Heatblast so they head down to the train tracks. Meanwhile on the train, Heatblast times out as Ben is trying to hold onto the ceiling of the train. As the train is headed under a sign, Ben realized he wont fit under it. However, Gwen and Grandpa Max come up next to the train and open up the curtains giving Ben something to jump safetly on to. After Ben is safe inside the RV, Grandpa Max is yelling at Ben for everything they think that he has done. Then when Gwen backs him up telling Grandpa that Ben is right and they should find Kevin, Max aggrees and they are seen trying to drive to find him.

Kevin with Heatblast's powers are seen at a hideout attacking the thugs that attacked him in the arcade. Back in the Rust Bucket, Ben attempts to turn into Stinkfly but accidentally goes Four Arms. Four Arms then jumps out of the RV to find Kevin. Once he gets there, it appears Kevins powers are gone, but Kevin says he will just get them back by absorbing Four Arms. When Kevin is about to shoot his absorbed powers at the thugs, Four Arms saves them by grabbing a hold of Kevin. However, Kevin wanted this and he touches Four Arms absoribing his powers. Kevin now has six arms and three eyes, his top two arms are also very large while the other four are small.

While Four Arms and Kevin fight eachother Grandpa Max and Gwen go over to the thugs to get them out of the area to a safe place. Right before the Omnitrix times out, Four Arms uses all of his strentgh to knock Kevin down. When Kevin starts to beg for mercy Ben is seen to be back to human. Kevin asks Ben for forgivness, and Ben tells Kevin he could join him if he uses his powers for good. Kevin tricks Ben by grabbing onto his arm and reaches for the Omnitrix. When Grandpa Max tries to save Ben, he just gets punched by Kevin and is knocked to the ground. As he tries to take the Omnitrix off Ben, the Omnitrix starts to turn green and sends a powerful explosion causing Kevin to fly backwards into a wall. Kevin is then seen as a human as he yells about losing his powers. After Kevin runs off, back in the RV Ben explains to Max that he is sorry, but Grandpa Max tells Ben he will have to earn his trust. In the tunnels with the traintracks, Kevin is seen to still have powers but can now control all of them by showing his power to create fire. 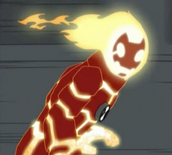 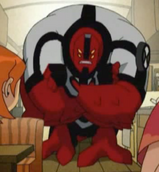