And Then There Were 10

And Then There Were 10 is the first episode of the first season of Ben 10.

Two ships, a giant one and a smaller one, are battling in space. Inside the giant orange ship is a squid like alien called Vilgax. On Earth, Ben Tennyson is bored in school.

Ben is working on a paper airplane and then accidentally throws it at his teacher. After that, the bell rings, ending the school year. However, the teacher stops him to talk to him about the paper airplane. We then see the two school bullies, Cash and JT. They are bullying a kid named Jamie for his money. Ben comes and tries to be a hero, however, he ends up losing the fight and he and Jamie are hung by their underpants on a tree. Soon, the Rustbucket arrives, driven by Ben's Grandpa Max. It turns out that Ben will be spending his summer vacation with his grandpa. He was excited, but he soon finds out that his cousin Gwen will be joining the trip. As they drive off, both complain about how they have to spend time with each other.. Once they find out where they will be camping out for the night, they remember that Grandpa Max makes the most disgusting food ever, and are then worried about starving during the summer.

After another fight between Ben and Gwen, Ben goes on a walk in the forest, talking to himself about how this will be the worst vacation ever. Then, he sees a shooting star, but it actually turns out to be a space pod that is going straight to him. After Ben jumps out of the way, he goes to see what it is. When the pod opens up he sees a weird watch-like device called the Omnitrix. He reaches his hand out to get it, but the watch opens up and jumps onto

his wrist. Ben freaks out and tries to take it off. Once he finds out that he can't get it off, he fiddles with it. The face plate pops up, showing an alien icon. Ben is curious and pushes the face plate down. When he does, he transforms into a fire creature named Heatblast. Heatblast freaks out more than before.. After thinking he was on fire, he calms down, realizing that he isn't getting hurt. He then finds out he can shoot fireballs. He ends up having too much fun and accidentlly starts a forest fire!

Later, Max and Gwen finally see the fire. They grab a fire extinguisher and go to put it out. Gwen finds Heatblast and is scared, so she sprays him. Heatblast tries to tell Gwen who he is, but she doesn't listen, so he sets her shoe on fire. She then realizes who it is. After Heatblast explains the story to Gwen, Max shows up, just as terrified. As Heatblast explains the story to Max, they remember about the fire. Grandpa Max says to start a new fire to burn out the old one. His plan works; however, it destroys the entire forest.

On the Chimerian Hammer, Vilgax's ship, Vilgax appears to be injured with his legs and arms missing. He is in a healing tank. He summons two drones to go down to Earth and retrieve the Omnitrix. Meanwhile, Heatblast explains what happened to Grandpa. After Gwen says that Ben is a monster, Grandpa says that he's an alien, confusing Heatblast and Gwen. Max quickly explains that he couldn't be anything else. Heatblast gets scared that he will be stuck as Heatblast forever, but the watch turns red and starts beeping. After a few beeps it turns Heatblast into a happy Ben. Max tells him not to play around with it and goes to check out the

was talking about. However, Ben does not listen

and turns into another alien. This time, he's a dog-like alien, Wildmutt. Gwen notices that he has no eyes, so she tries to hit Wildmutt with a stick. Wildmutt discovers that he can see, only with his gills. He runs off into the forest, leaving Gwen concerned.. Wildmutt detects something and dodges a laser. He sees one of Vilgax's Drones. Wildmutt bites the drone, destroying it. Suddenly, the watch times out and Wildmutt turns into Ben. The second drone targets Ben with its laser. Luckily, Gwen appears and hits the drone from behind, destroying it.

Back on Vilgax's Ship, Vilgax finds out about his drones being destroyed and sends a bigger drone. The drone comes down and smashes the Omnitrix pod.

After the drone leaves, Max sees the pod and has a bad feeling about it. Back in the RV, Max talks to Ben. On the radio, they hear about a robot attacking a campsite. Ben thinks that it's another drone, so they go over to check it out. Grandpa confirms that it is ok for Ben to turn into something to save them. Ben turns into a Diamond-like alien Diamondhead. After a hard battle, Diamondhead destroys the drone. In space, Vilgax says that the person who has the omnitrix is very powerful.

In the morning and Grandpa and Gwen are packing. XLR8, a new speed alien, runs in and loads up the Rustbucket. He turns into Ben, who says that he went to take care of something. In Bellwood, very confused Cash and JT are hanging from a tree by their underwear. 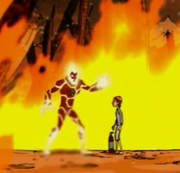 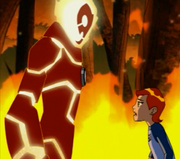 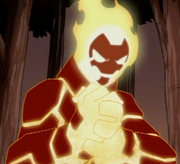 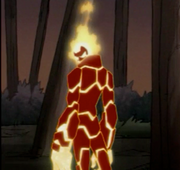 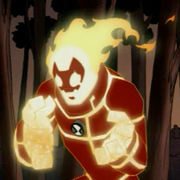 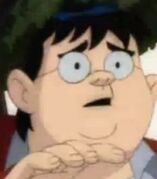